Why Can't Dogs and Cats Get Along? 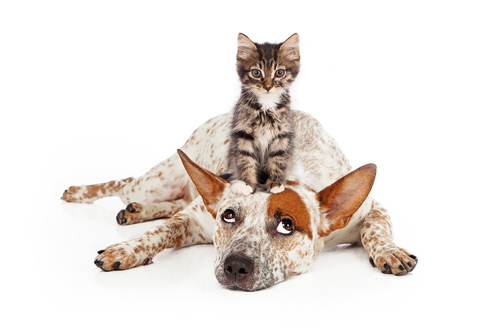 As a company that makes great dog food and cat food, we get the opportunity to speak with a lot of awesome pet owners. While we've definitely heard stories about dogs and cats who get along great with each other, more often than not it's the other way around. When a dog and cat get around each other, the most common outcome is the they have a moment of tension and then the cat runs away. And in some instances, this type of meeting may result in the two animals getting in a short skirmish.

Given that running away is the more common response than a skirmish, it brings up the question of where the phrase "fight like cat and dog" originated. If you go back to the 19th century, it was common for both animals to roam the streets. When scraps of food were around, competition for them could be fierce enough to inspire actual fighting. While dogs deal with competition among each other based on pack hierarchy, cats would generally fall back on their instincts of being solitary predators.

Another reason that tension between these animals is so common is they have very different ways of communicating. Cats prefer to hang back and assess situations before getting involved. With dogs, their response is more often to charge right in to see what's happening. When these two styles collide, it often leads to a quarrel.

Helping Dogs and Cats Get Along

Although we've focused on some of the key reasons dogs and cats frequently don't get along, we did mention at the beginning that it's possible for both animals to be around each other without any major fighting. Whether you're just curious how that happens or are in a position where you would like to have peace between these pets, we want to share the best strategy.

The main thing to keep in mind is a dog needs to learn the cat's language in order for these animals to get along. This is a goal you should have from the very first time the two animals meet. A typical exercise could mean bringing both animals into the same room, with the dog at your side on a leash. If the dog acts calm, give him a treat. If he lunges at the kitty, lead him a few feet away until he relaxes. This teaches your dog to be less forceful and also shows the cat that it's not being relentlessly pursued. While this can work with adult animals, it's most effective when both pets are still young.
Posted by Unknown at 10:39 AM